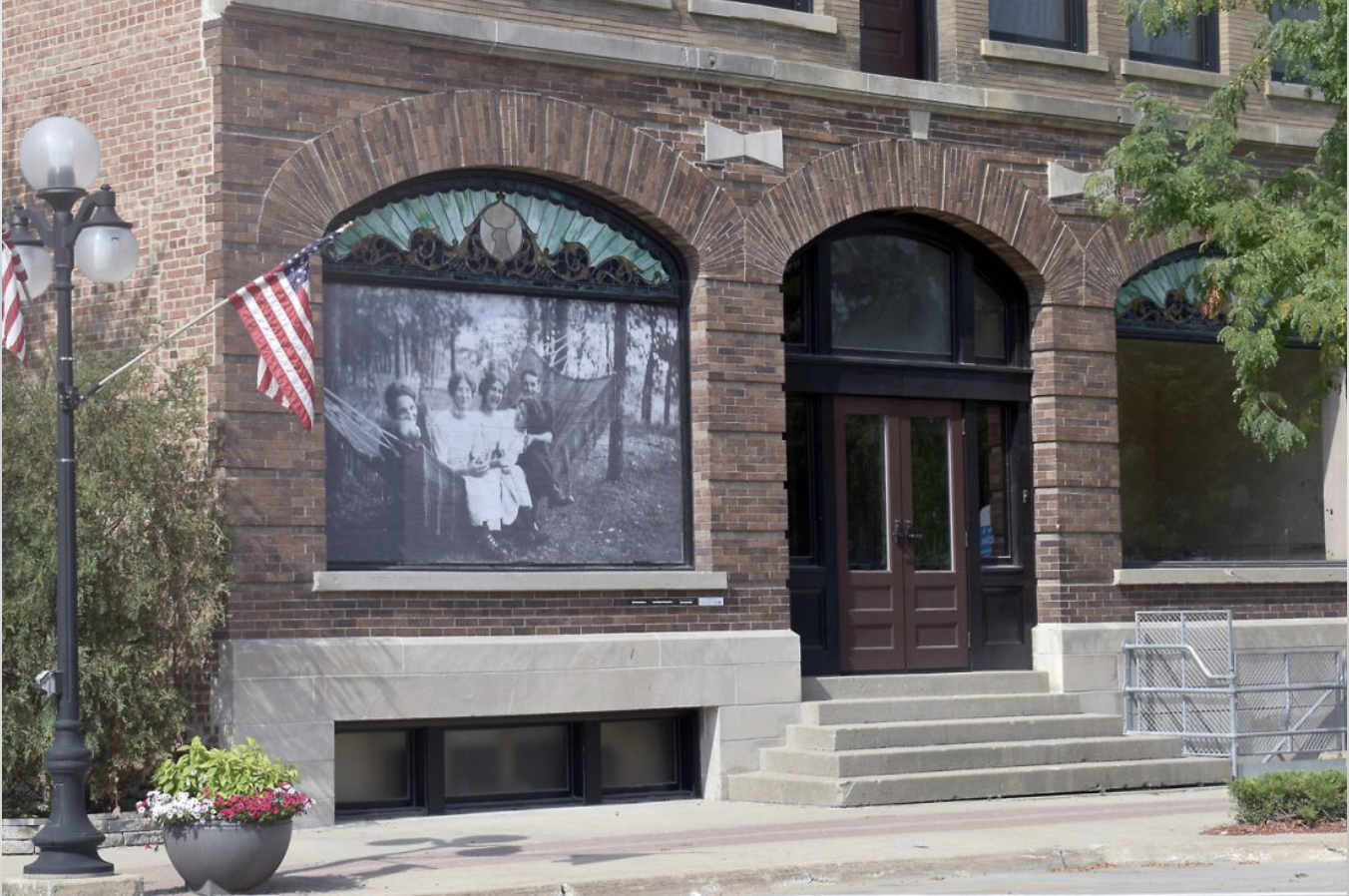 Three new large photo murals have been installed in downtown Webster City, giving area residents a look back at life in the late 19th and early 20th centuries.

Artists Isaac Campbell and Payton Smith worked through the weekend to install the three large format photographs using wheat paste to adhere the murals to the west wall of the RSVP/Senior Citizens Community Center, a window at the former Elks Building and windows at 600 Second St.

“This project has been two, almost three years in the making,” Campbell said. He received a grant from the Iowa Arts Council to install the wheat paste murals in five different Iowa communities, including Webster City.

“We were supposed to start in 2019 into 2020. There’s a lot of planning involved, talking to communities, getting people going,” he said. “And then COVID hit.”

Despite the delays from the pandemic, the timing of the mural installation has worked out well, according to Campbell. And on Tuesday, the murals will have their biggest audience as RAGBRAI passes through the community.

The mural project was designed to highlight the photographs of the Fortepan Iowa archive. According to the Fortepan Iowa website, “Fortepan Iowa features curated historical photos taken by ordinary Iowans over the nineteenth and twentieth centuries. The photos represent the personal, whimsical, poetic, significant, and accidentally artistic moments of everyday Iowa life, and tell a rich story of Iowa’s great diversity and complexity.

“The aim of the Fortepan Iowa program is to find and digitize photographs that might disappear or be thrown away and organize them into a searchable visual chronology,” the website states.

Campbell said the locations that would offer the greatest visibility were chosen for the murals.

“We went for street corners and windows along the busy Second Street. But the RSVP wall was the first building that we knew we had to use,” he said.

Campbell said the wheat paste process involves slathering the paste on the wall or window, applying the large panels of photos and applying another coat over the photo. The sticky paste becomes like glue, hydrates the paper, and creates a seal on top and on the back of the photo. The paper is just regular copy machine paper. But for this project, the artist said the murals are created using three-foot by 25-foot rolls of papers, allowing them to install the piece with fewer creases and seams. That means they will be more resistant to the elements.

“It’s an art form that invites anyone to participate,” he said of the wheat paste work. “It takes no special skills, you don’t have to be an artist. If you can move a paint brush, you can do wheat paste,” Campbell said.

At the 600 Second St. location, the artist has posted an explanation of the exhibit.

“How do we begin to heal our hearts after more than a year filled with loss, grief, depression, anxiety, fear, separation and loneliness? For many of us, the pain of lost memories and abandoned moments together still linger. Just like memories themselves, the pasted murals, made from paper, flour and water, will disappear over time. Some may be ripped away by a violent thunderstorm; others may slowly fade until the faces become unrecognizable,” the artist noted. “This period has made clear the incessant march of time and with it, the ephemerality of our time together. We cannot return to our distracted, disconnected behaviors of the past. We must change.

“…Maybe, just maybe part of the solution to healing our hearts is as simple as getting back together.”

View this article as it originally appeared in the Daily-Freeman Journal.