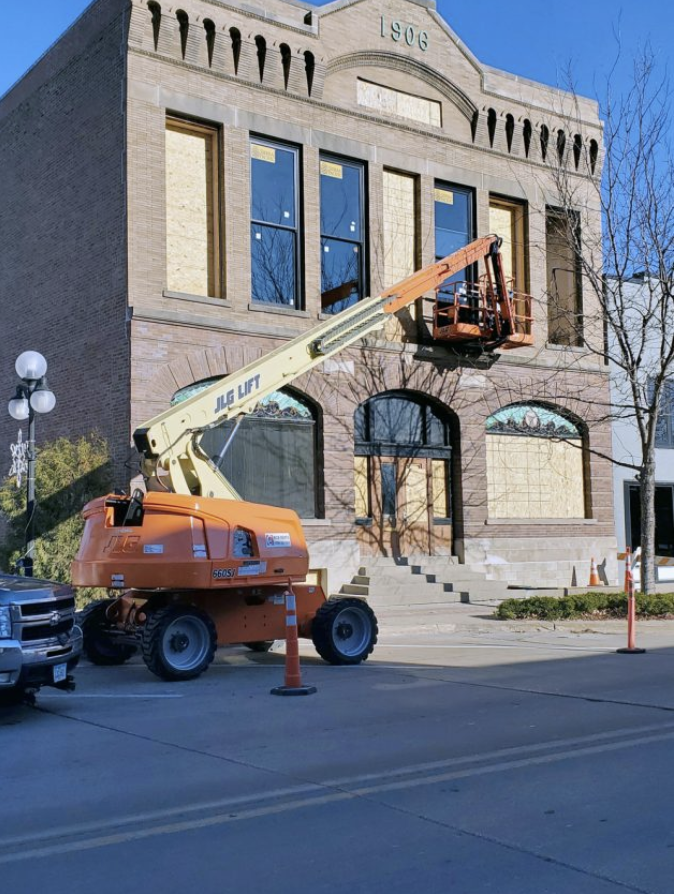 The extensive exterior facade improvements at the former Elks Building, 713 Second St., are nearing completion with the installation of new energy-efficient windows on the front and rear of the building.

“Windows are finally going in,” said Lindsay Henderson, president of LIFT WC, the nonprofit that owns the former lodge building. “I’m excited to get up there and see daylight in that ballroom. It should be amazing.”

Also reinstalled were the stained-glass windows on the lower level. The windows feature the iconic elk head, harkening back to the building’s lodge days.

“They had all of their little nicks and cuts and repairs, and one little missing piece was replaced,” she said. “They have been cleaned and re-leaded so they are in perfect condition now.”

Henderson said the project is close to being right on target for completion yet this year. The improvements included tuck pointing, cleaning and repair of bricks, replacement of windows and the front door. There was also some structural work done on the back wall of the building.

From there, the LIFT WC crew will turn its attention to the interior upgrades that needs to done. They’re working with the RDG Planning and Design on the renovation plans.

Plans for the basement and main level are nearly nailed down, she said, but the group is looking for some help from the public. They are hoping to find photos of the inside of the building from its earlier days.

“If people recall an event like a wedding, banquet or family reunion and they have photos, we’d like to see them. We don’t care who is in the picture, but we’d like to see what’s in the background,” she said. While the architects can recreate historically accurate dÈcor for the period, but Henderson said her group would like to bring the building back to true firm as much as possible.

“That would help the design firm as they create their renderings,” she said. Anyone with photos can contact Henderson or visit the group’s Facebook page.

Once LIFT WC has the design plans and the cost estimates, Henderson said they will be able to target fundraising efforts.

“That’s when we’ll be able to set our target for grants and donations,” she said.

Henderson said the organization will also reach out to the public for some ideas on what they would like to see in the building.

“As far as the ballroom and the basement, we’d like to hear what types of activities the community would like to see in that space,” she said. “We know it will likely be in demand for rentals like weddings and reunions.

“But what kind of workshops or partnerships would you like to see or art activities? What would be the ideal use of that space so that it can be used to its maximum capacity,” she said.

They hope to make the main floor space available for commercial tenants.

It will still be a while before that happens, Henderson said, pointing out that the planned projects were on a 3 to 5 year timetable.

Not long after the group purchased the building in 2019, LIFT WC hosted a series of music nights, featuring local musicians that drew some big crowds to the old building. Henderson said she hoped LIFT WC could resume its music nights next summer, if the pandemic has waned. She said the group has kept in touch with many of the young musicians.

“As soon as we can,” she said. “we’ll bring those things back just as soon as we possibly can.”